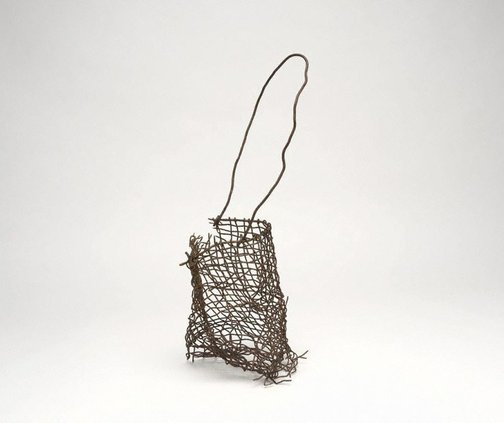 Lorraine Connelly-Northey, born in 1962 was raised in Swan Hill in Victoria  and comes from a strong tradition of weaving. She was influenced by an amalgam of her father’s Irish ancestry and mother’s Waradgerie (Wiradjuri) heritage. Since 2002 she has been re-imaging rusted farm cast-offs like wire, corrugated iron, roofing materials and mesh, shaping, bending and twisting them into symbolic interpretations of traditional containers and vessels such as Narbongs (string bags) and Koolimans (bush bowls).

The simplicity of the shape and the time-worn rough edges of the metals used speak of the essential changes in the land; from a country where string bags and baskets made of grasses and vines were used for carrying and washing gathered food to a place where the machinery of mass-agriculture has taken over food production. The artefacts of todays inhabitants are found in the rubbish tips.

Her sculptures, including amazing larger pieces like ‘Three Rivers Country’ below have been collected by the National Gallery, MCA, GOMA, AGNSW among other public galleries. I’m sure deserves the acclaim. As another farmer’s daughter, a weaver and someone who loves to play with the rusty colours and patterns of iron and the bends and kinks in old wire I feel an affinity with Connelly-Northey’s sculptures.  They take me straight to the land.

Images copyright of the artist.

This site uses Akismet to reduce spam. Learn how your comment data is processed.